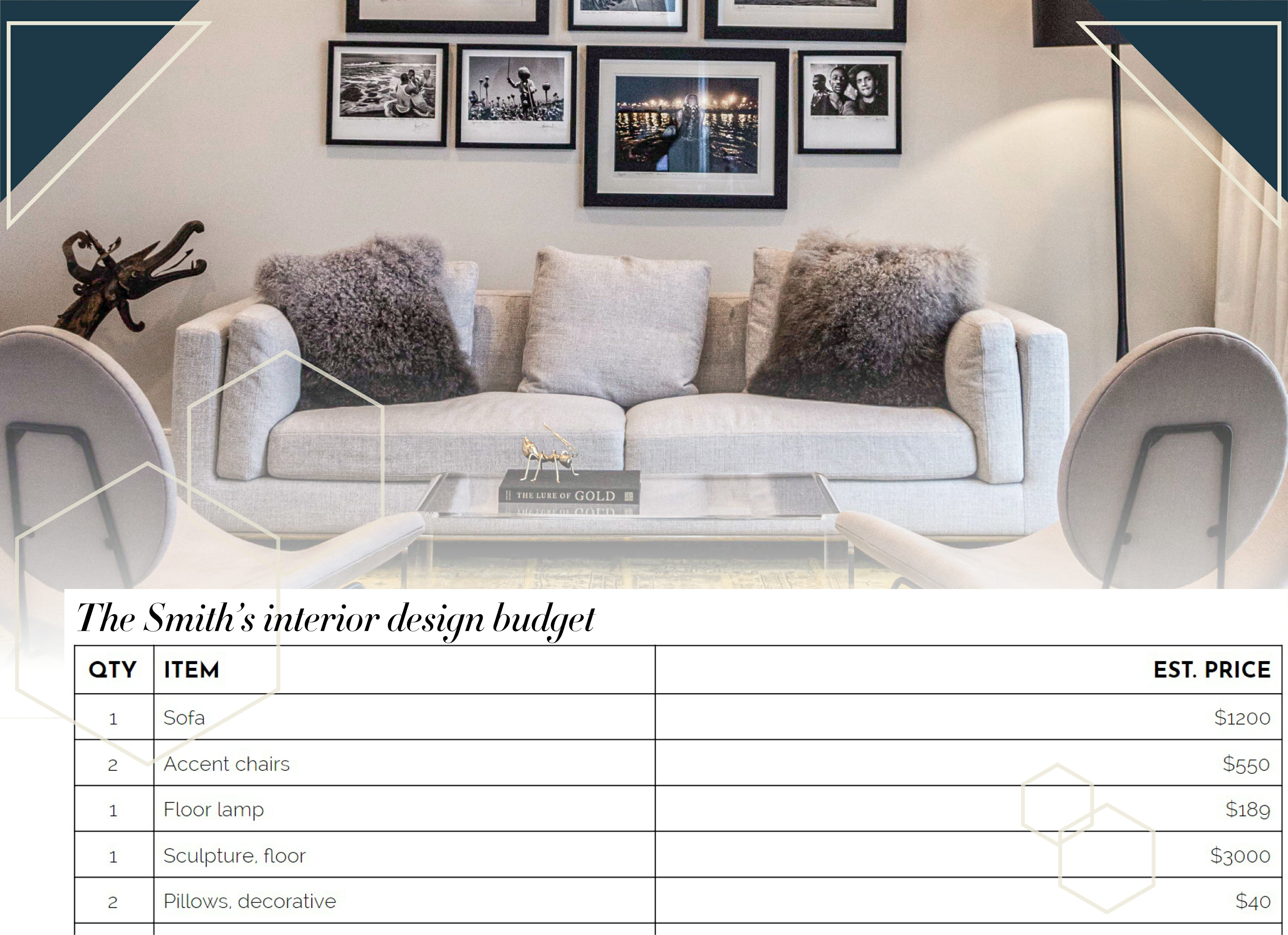 How to set your interior design budget: Part 1

Whether you’re building a home, remodeling your new commercial space, or updating that early 2000’s kitchen, it’s hard to know where to start when setting your interior design project’s budget. You may know how much you’d like to spend, but don’t know if that number is even feasible. To be honest, it’s probably not.

Now, don’t think we say that to scare you — we say that to prepare you. As interior designers, it’s our job to set cost expectations, and the earlier we can do that, the better. Imagine if you went to get your tires changed for the first time, expecting each tire to cost $20, and when you get there the serviceman informs you it’ll be $100 instead. You’re frustrated because you didn’t prepare for this. It was your first time purchasing new tires, afterall. And the serviceman was just charging industry standard. But because the expectation didn’t meet reality, you end up having a negative experience. That’s why it’s better to prepare you earlier rather than later.

So, how can you, the client, prepare a realistic budget before even approaching a designer? That’s what we’ll help you with in this two-part post. In Part I, we’ll cover interior design budgeting for decor and furnishings.

This may seem obvious, but the first step is picking the room you want to redesign. You may only have one room, but if you have an entire house you should look at each room individually instead of grouping everything together. This will make the following steps much easier. Look at your room and create a spreadsheet of all the possible items that would go in there. The most critical will be the items you probably don’t think of — paint or wallpaper, hardware (i.e. curtain hardware, towel racks, etc.), art, accessories, rugs, pillows/pillowcases, plants and planters. If you have an inspiration photo from Pinterest or elsewhere, list all the items in that photo even if you think it’s too much. It’s better to overshoot then underestimate. Once you have your room’s purchase list, head on over to your favorite home store’s website (or in person if that’s your thing). Take your list and randomly select items from that store that check each box. For example, if you’ve listed “king bed”, price out a random king bed. The idea is to get a general budget, not a specific one. Specifics won’t be needed at this point since you’ll be entrusting your interior designer to make the best selections later on. Another benefit to the exercise is that it allows you to see how each item adds to the total cost. Remember, you’re not only buying new furnishings, but you’ve also hired a designer to create your interior’s concept. There will also be an “installation day” — the day designers and crew come in to install your new furnishings. The cost of these services will vary based on the designer’s cost structure, but make sure you consider each before finalizing your budget.

We understand the reasonable budget will most likely be higher than your desired budget, and that’s ok. If the difference is slight, you can discuss this with your designer. Maybe it’s too far out of range for you, in which case an e-design route could be optimal (this option has minimal service fees, as the purchasing and installation are left to the client).

Whatever you choose to do once you’ve calculated your budget, at least you’ll have made an informed decision!

STICK AROUND FOR NEXT WEEK!

Catch next week’s Part II, budgeting for a remodel/new build.